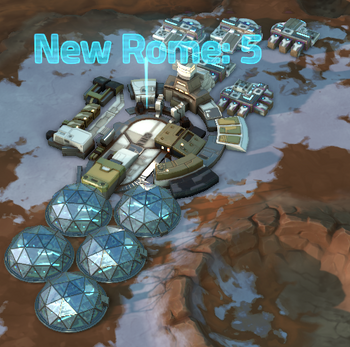 Colony buildings consume various resources depending on the type of colony and buildings present. This adds a non-player pressure to the resource market. The colony also provides bonuses to adjacent Pleasure Domes and bonuses to adjacent advanced player buildings. The number of labor modules will match the number of habitat modules for the colony. For example, 2 habitat modules means there will be 2 offices/warehouses/labs/etc... in a combination based off of the colony type.

As a match progresses, the colony will grow. The number in parentheses next to the colony name is the current population. The example in the image has a population of 5, meaning it will have 5 habitat modules and 5 labor modules.

The colony starts with a population equal to the number of players plus one.

At the start of a game, the colony beings with labor modules which will all be of the same type, determined by the colony's associated region (see "Starting Labor Module" column below). After the game has begun, when a new labor module is added its type is selected from a list of possible labor modules, also determined by the colony's associated region, with Ceres allowing one additional module type and Io and Mars allowing two (see "Possible Labor Modules" column below). The new labor module is selected randomly from the list, each with the same probability.

An easy way to remember what the colony will never consume during the game is: Among the four options (Power, Chemicals, Glass, Electronics), whatever resource consumption the colony starts with, it won't ever consume the resource above it in the resource list. (For power, consider electronics "above" it.)