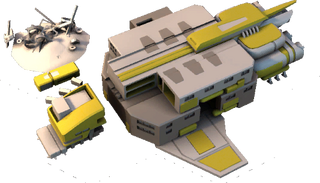 Of the gameplay changes given to the scavenger player, the one most notable is the use of carbon instead of steel in the production of most buildings. This drastically changes the early game demands of a scavenger player, and typically allows for quicker, easier upgrades. As carbon is a raw resource, it can be produced much quicker than steel, which allows for scavenger players to very quickly acquire the resources necessary to upgrade. Choosing a scavenger HQ is typically recommended when the map has High carbon tiles with some adjacency.

The ability to learn about market events prior to their occurrence refers to the natural market shortages and surpluses. Not only can a scavenger player shape their production around these upcoming events, they can also simply purchase or sell a resource that is about to gain or lose value.

Finally the ability to use the black market more frequently allows the scavenger player to secure more claims in the early game, and makes them particularly fearsome in games with 4 or less players. Striking one player out of 7 is not nearly as devastating as striking a foe in a 1v1.

Typical scavenger openings involve landing adjacent to carbon. Players should typically place 2 elemental quarries and an aluminum mine, though if aluminum is expensive and carbon is cheap, the reverse can also work.

After reaching level 2, look to claim additional nearby raw resources. Depending on what resources are available and what prices look like, moving into two production buildings can also be useful. Scavengers will typically have first access to entering any markets that start with doubled prices, which can prove to be a large boost at a time where scavengers might otherwise struggle to make money.

Carbon Scrubbing - While you should be producing large amounts of carbon anyway, Carbon Scrubbing forces your opponents to consume carbon for their production and makes saving carbon for expensive buildings like Offworld Markets easier.

Nanotech- The ability to switch between mining and manufacturing production can be critical to scavenger players. If carbon's price stays as high as you hope, the recycling of that resource upon structure deletion can be huge.

Scavenger players are vulnerable to underground nukes. They thrive off of their carbon production, and if you take that from them they are crippled. Fortunately, Goon Squads can alleviate that weakness.

Scavenger players often have trouble with debt because it can be difficult to cover life support and power costs on their limited number of claims. If you can keep their buildings shut down, you may be able to force them to deal with their debt before they can get aggressive with the black market. If Bribe a Claim or Cook the Books are available on the black market, this weakness can be mitigated.

Scavenger players tend to have slightly lower stock prices, not only because of possible debt problems, but because their structures are valued less because they use carbon instead of steel.

Due to their reliance on black market and its sabotages with lower cooldowns, Scavenger players tend to cause more provocation from other players than other HQs, particularly if they've been caught in the attempt. Needless to say, other players may focus sabotage attempts on that said player in retribution for his/her activities.